Dino lettuce, entry to the desert (of Yuma) 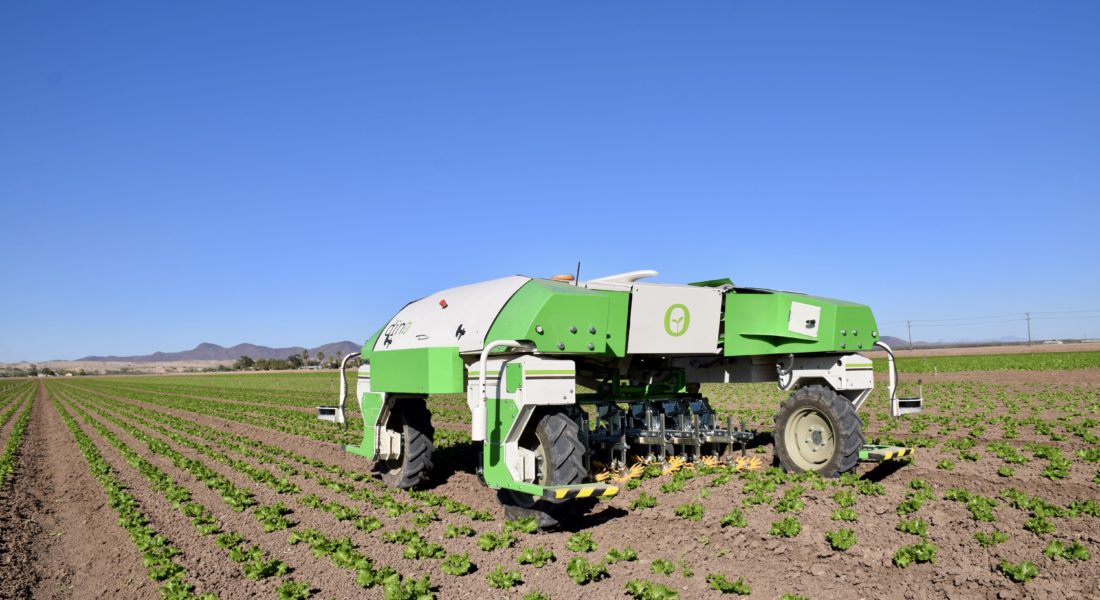 Dino lettuce, entry to the desert (of Yuma)

After visiting the ranches of Salinas a few months ago, a return to America with Dino in California’s neighbouring state, Arizona. And more precisely in Yuma, where lettuce production is relocated in the winter.

Here, the proximity of the desert offers favourable conditions for growing winter lettuce with a temperature of about 15 degrees during the coldest months. Thus, many farmers from Salinas (California) take advantage of the complementary climate between the two regions to farm the agricultural lands of Yuma (Arizona) during the winter period.  For the Dino weeding robot being tested on site, it is necessary to adapt to specific local features and the technical processes in force in Yuma. Tests carried out in the field at Top Flavor Farms, J.V Farms and Mellon Farms, allow Naïo to better understand the needs of Yuma’s farmers.

With an average temperature of 45 degrees in the summer, here there are fruit crops that are resistant to the heat (melon, pepper, watermelon) and, above all, fields of alfalfa and wheat as far as the eye can see. In the autumn, these crops are gradually replaced by extensive rows of lettuce. Sown between September and February, they will be harvested from the end of November to May. Designed for cereal crops, the plots are 2 to 3 times larger than those in Salinas. “Here the production period is relatively short: there is only one crop cycle, the surfaces are all planted at practically the same time.  To cope with this, the machines work practically 24 hours a day, therefore, the robot’s sturdiness and work output have to be taken into account with intensive use being expected of the Dino”, explains Simon Belin, Technical Reference Person in the United States.

Mark Siemens, a researcher in the field of mechanised and precision farming at Arizona University, who is collaborating with Naïo on site, adds: “Weeding 40 acres (slightly more than 15 hectares) a day would be very useful, either as a result of increasing the width of the robot or accelerating its speed.”

Another typical feature of Yuma is the irrigation system in this desert area where there is less than 50 mm of rainfall a year. “The water arrives by canals from the Colorado River, then the field is flooded so that the lettuces have their roots in water”, explains Simon. Thus, the beds are scaled in such a way that all the lettuces have access to water. “With beds that are smaller than elsewhere, it is necessary to adapt the size and spacing of the weeding tools on Dino so that it spans two 42-inch (about 107 cm) beds for example, and therefore, rethink its work output.”

Towards fleets of robots in the fields?

To this should be added the choice made by Yuma’s farmers to sow rather than plant salads.  Whereas plants form regular rows with evenly sized lettuces, sowing gives more uneven plots with lettuces of different sizes. In these conditions, weeding along the row is an additional challenge for Dino. Although Mark Siemens says he is “impressed by its ability to distinguish the crops from the weeds and navigate precisely in the grass-covered plots”, for him the strength of the robot resides in the new active tools for weeding between plants newly developed by Naïo. “I can’t wait to see this technology at work. It will offer the robot a significant advantage compared to conventional equipment.”

After the first demonstrations, Yuma’s lettuce farmers have an insight into Dino’s potential: in order to manage an intense period of production on large farmed areas and find a solution to the problems of the rarity and the cost of labour, they can easily imagine setting up “fleets” of autonomous weeding robots in their fields. “Within a few years, it is possible to imagine one person managing two, then five, and then ten Dinos on several plots all at the same time, all controlled remotely by a single operator “, explains Simon.

Until then, Mark Siemens refers to the improvements that could end up convincing the American market: “Equipping the robot with additional tools so that, on top of weeding, it can manage localised spraying, assess the pressure of insects, or detect diseases, estimate yield forecasts, etc.” Plenty of food for thought for Dino’s future developments!