Winter’s coming, so it’s time to visit Bastien again. Bastien is one of the 4 co-founders of the jointly run GAEC de la Ferme d’Agen, a vegetable farm in the French Aveyron department. The Oz weeding robot arrived on his farm the previous winter to mechanically weed vegetable crops. We met Bastien six months ago to collect his first impression of the Oz robot. …. Time for a follow-up interview!

Bastien: We had a really good season in terms of crop yield, in spite of spring being really humid. As to our use of the Oz robot, we’ve now got the hang of it and it works really well on all the crops we used it for. We were especially impressed with its work on the fava beans and leeks. When I watch the robot weed, I feel confident we made the right decision to use it on part of our vegetable crops. We’ve also used it on the green beans in our greenhouse and outdoors. As to the cabbages, things were complicated in the beginning because the space between the cabbage rows was too wide. However, as soon as the cabbages started growing, the robot really worked well there too.

Bastien: During the upcoming winter, Oz will still continue to help us out. It’s going to weed our fava beans, green beans and peas, which have already been sown in a way that fits the robot. We’ve had to adapt our sowing techniques to the robot, which requires flat sowing. We’ll use this approach for the third and fourth seeding episode. However, we can’t use it during the two first seedings because it’s too cold and humid out here. We’ll continue to use our bed former for the first two seeding episodes. 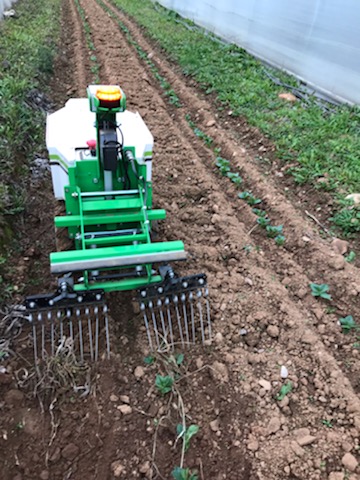 We’d also like to have Oz use the harrows before the seeds start to germinate. This would allow us to remove the very first weeds. We’ve already tried it out on our green beans and it works fine. We also plan to have the robot mechanically weed our mulched rows so that it starts working in the greenhouse in early spring before it moves outdoors for the third seeding. I’m convinced that it’s best to use the robot frequently all through the season instead of using it only from time to time for the big chores.

A positive impact on visitors

Bastien: Oz also has a positive impact on people who come to the farm to harvest their own vegetables or to buy them in our shop. At first, they’re very surprised when they notice it. When we explain what it does, they’re instantly reassured as to the ethics of having a weeding robot on the farm. People quickly realize that farmers are constantly seeking to improve their way of working and mechanical weeding robots allow us to do just that.

Interested in learning more about the Oz weeding robot? Don’t hesitate to visit the Oz webpage, which explains our approach and sums up the technical details.