Dino sets off to work among the leeks 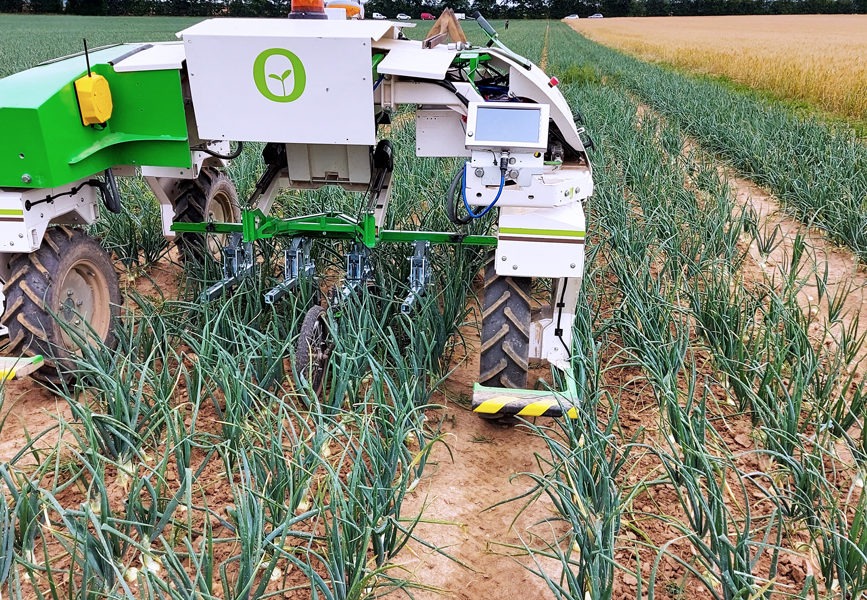 Dino sets off to work among the leeks

Dino made a stopover at Légumaloire in the department of Loire Atlantique this year, where the enterprise has fields of conventional crops and organic crops. Lamb’s lettuce, radishes, leeks, fennel, turnips and young salad crops are cultivated on 150 hectares by around forty employees, not counting seasonal workers. The objective for Naïo Technologies was to try the robot out on some leeks. Benjamin Clavet, crop manager within the organic structure of the Légumaloire Group, reflects on Dino’s progress, with plenty of positive notes and prospects for the future on the menu.

Dino, as efficient as a hoe on leeks

“At Légumaloire, weeding the leeks is carried out mechanically. We generally use a spiked harrow in two passages at the beginning of cultivation, then a hoe. It is sometimes necessary to go over by hand to take out the weeds in the row”. This year, however, the towed machinery has stayed in the shed during a 2-hectare test.
Dino, with its ploughshares and Kress fingerweeders has dealt with weeding the leeks. “Three passages have been made over the planting mounds”. The result met all expectations. “Sometimes with classical hoeing, you need to go over again by hand at least once to weed the row of leeks. That hasn’t been the case with Dino this year. That’s a positive point.” For Benjamin Clavet, “guidance is practical and translates well onto the row. The weeding is as efficient as classical hoeing”.

Working together to adapt the robot

Dino’s work required some adaptation of both the robot and the plots. As the crops were irrigated, some changes needed to be made so that the width suited the structure of the planting and the position of the irrigation rods.
Benjamin Clavet also believes that the farm and the plot structures have to adapt to the passage of the robot. “The ends of the plots are sometimes wet and not always flat. We’re going to have to do some work on that in order to continue with Dino.”
The soil type requires specific intervention. In one of the trials at Légumaloire, the soil texture was quite loamy. During the spring this year, the crop manager noticed lots of rainy periods interspersed with dry periods. “That meant we had to repeat a lot of things”. It was necessary to manage soil crusting with a 15-20 cm-deep passage with the hoe. The development of a tool on Dino for doing that would be a positive thing.

Benjamin Clavet is already thinking about other uses for Dino. With a few adaptations to the robot, it would be possible to look at greater versatility and total autonomy.
He can quite see the machine being used among other crops. “A test is going to be carried out soon on carrots and I’m interested in using it on crops sown very close together, such as radishes or lamb’s lettuce”. Note that these crops are sown 2 cm apart in the row.
For lamb’s lettuce, “the classic technical itinerary is carried out using tools which give off steam. The fuel and workforce costs are very high, not to mention the time needed for each hectare: around 40 hours!”. Using Dino would undoubtedly reduce these costs.
He also welcomes the potential developments regarding sowing using Dino. Fitting a seed drill onto the robot would allow the positioning and the drawing-up of the map of the plot to be better managed, as well as decreasing the mechanisation costs.

From now on, the Légumaloire Group is enthusiastic at the idea of continuing the trials next year, “over a greater surface area”.

#SeminisIXFieldDays Don't miss it! Dino is doing some demos during 3 days at Enkhuizen with @AbemecFlevoland , our… https://t.co/MGUrsqYV6H22 September 2020 - 9 h 40 min