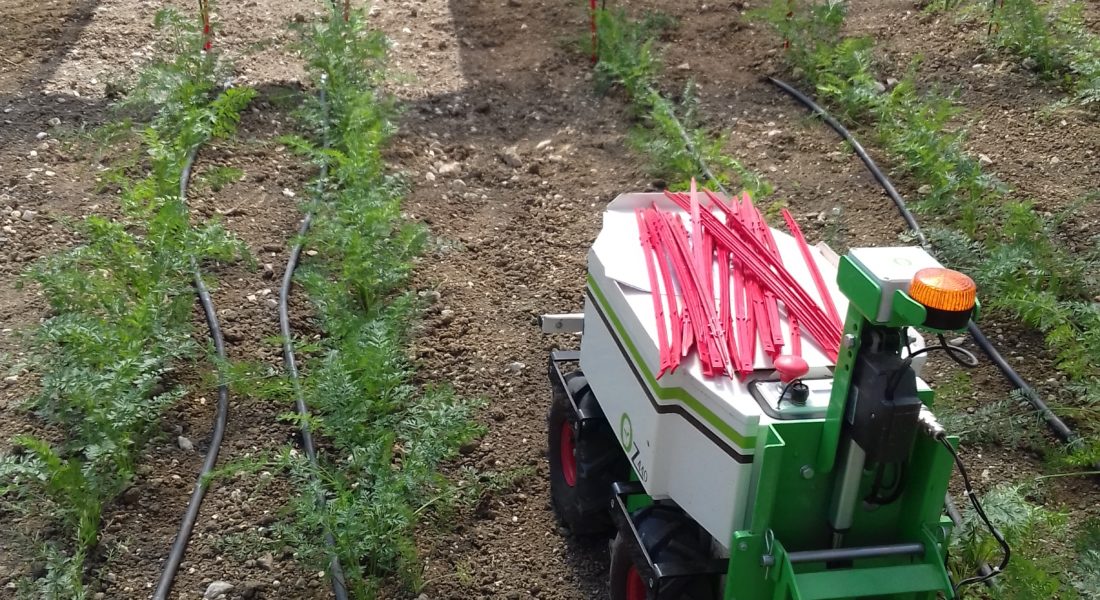 If there is any agricultural sector where innovation belongs, it must be seed production! For several years now, farmers, multipliers and seed companies have chosen to use Oz on their plots. Today, we are meeting with Jérôme Pain, Deputy Director of Operations at Bejo to learn more about his experience with Oz.

Bejo and Oz: a long-standing relationship

A long-time partner of Naïo Technologies, Bejo has been able to perform many tests with Oz in different crops and on different sites. In this article, Jérôme Pain presents to us his work within the Pontigné site (in Maine-et-Loire). And in a future article, we will also focus on the feedback of the team from Saint Martin Lalande (in the Aude department), a site that has also been equipped with an Oz!

Bejo is a seed company specializing in vegetable species with extensive experience in selecting and producing varieties for organic and conventional farming. This company of Dutch origin is well established in France with many seed multiplication sites.

Jérôme Pain is Deputy Director of Operations at the Pontigné site, where the team of thirteen permanent employees can comprise up to thirty or more employees during the season. He is in charge of managing the various crops and also the staff. It should be noted that within the 9 ha of tunnels and 120 ha of open-field crops, a significant portion of the farm is AB certified (AB standing for “Agriculture Biologique” in French, meaning “Organic Agriculture”). This certified section comprises 2 ha of tunnels and 40 ha of open fields.

In Pontigné, the focus is not on selecting but rather multiplying: this is the essential step to increase the quantity of seeds for the selected varieties, so as to have sufficient supply for market gardeners. This process is not undertaken by Bejo sites alone, since several partner farmers also carry out the multiplication of seeds under contract with the company. These are then supported by the company’s technicians.

“We must find alternative solutions: workforce or robot”

Jérôme joined the company in 2014. His first contacts with Bejo were in the same year. Based on these first tests, the idea was to use Oz in open fields of AB beetroots and onions. But the machine has ended up being used increasingly in the tunnels on conventional crops, in order to remedy the shortcomings of authorized herbicides. According to Jérôme “we must find alternative solutions: workforce or robot”. It is true that hoeing can be successful after several passes of the machine, but it is never enough and time must always be devoted to manual work in the row.

Significant use of the robot started two years ago in open fields of organic onions and beetroots. Each of the 75 cm wide spacing was already adapted to the machine and all it took was a good levelling of the headlands. The work on beetroots was more delicate for the crop is a less upright and takes longer to become visible to the robot’s sensors. Jérôme explains that he will therefore use the robot in manual mode, with the remote control in hand, to guide it for the first passes on these sown crops. He believes this corresponds to situations when “even visually on a tractor, it is difficult to see the rows of seedlings or transplants, it’s easier to see the lines on foot with the robot.” Future technical developments to allow earlier passes would meet a genuine need for production. The work carried out with Axel Banon, Technical Advisor at Naïo, made it possible to include new versions of the robot. According to Jérôme, this has brought benefits in terms of guidance, in particular on beetroot plots where missing plants are common.

The hoeing machine could not be passed in tunnels with a wide variety of crops (cabbage, fennel, leek, carrot, parsley, etc). It was therefore necessary to work with a hand-held or wheel hoe. Expectations were very high regarding the benefits of Oz, but the arrangements were also very complex. This is because the defining feature of seed production lies in the obligation to follow strict protocols such as the precise distribution between male and female plants. Space is also valuable in tunnels! In these much-vaunted tunnels, Jérôme chose to go from 50 cm inter-rows (too tight for Oz) to double rows with 30 cm spacing, leaving 80 cm aisles for the robot. This way the Bejo team managed to extensively increase the hoed surface area. Hoe and hand work are now focused on the double row while Oz handles the inter-rows and aisles. This adaptation has been possible on crops such as carrots, celery and fennel. Taking fennel for example, Jérôme gives us a ‘tip’ about using the comb harrow directly on the row with arm extensions, which passes well provided that the plant is rooted and the user is not too aggressive. He believes this work in the row has enabled him to reduce substantially the emergence of weeds on a supposedly fragile plant.

Oz has reduced working time considerably. Time is still devoted to weeding, but more in tandem with the machine: one person manages the robot and complements the work in the rows, while the robot works in the tunnel. The need for cover crop control is important because seed producers are concerned about excessive levels of weeds that could disrupt plant pollination and even the work of the teams, who have to go over the plots and tunnels very frequently at harvest time.

Work organization is important when integrating a new tool. As the robot is being shared with the Auxere site in Maine-et-Loire, careful planning of its use is necessary for the two or three weeks it is available, before it goes to join colleagues. The planning therefore depends on the production schedule but also on the irrigation frequency to be alternated with hoeing sessions.

This organization has been facilitated by the desire to form a team. Jérôme is not the only user, two of his co-workers at the site know how to operate the machine, and they do not hesitate to contact Axel if they have a question.

Our partner concludes the meeting with his assessment on the use of Oz “when you follow the protocol with the robot, you hardly have to go back”. According to him, optimization of Oz was achieved in Pontigné thanks to all the necessary arrangements and tests.

To learn more about the Oz robot go to: https://www.naio-technologies.com/en/agricultural-equipment/weeding-robot-oz/