How to avoid compacting vineyard soils? 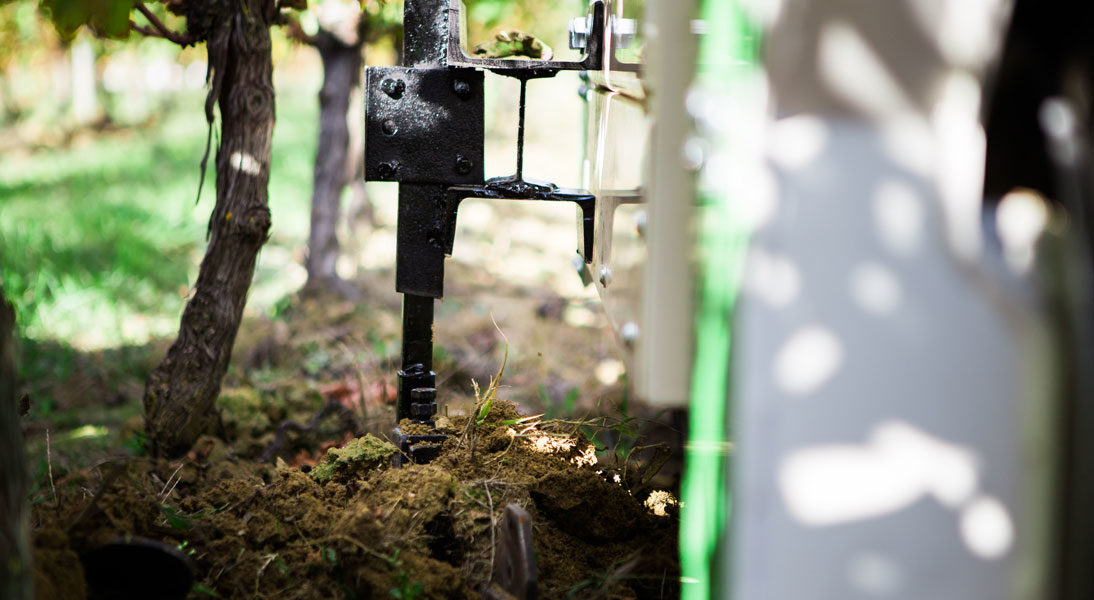 How to avoid compacting vineyard soils?

Caused by the constant passage of machinery during wine-growing operations, compacted soil may affect yield in the long-term. What levers can wine-growers implement to limit soil capital deterioration? Opting for equipment well-suited to their agricultural operations, the possible use of robotics, etc.: to ensure optimal efficiency, their strategy must be a holistic one.

“Compaction disturbs soil life: it reduces activity levels by the micro-fauna and any other organisms essential to soil function, and causes drops in mineralisation and nitrogen production”, reminds Christophe Monget, Technical Director at Ceps-Sicavac, in charge of the Sancerre experimental domain. “It is also responsible for poor water infiltration, with a risk of stagnation, trickling and thus root asphyxia”. This well-known phenomenon is however becoming increasingly more widespread, and has led wine-growers to consider all kinds of solutions for preserving their vineyards.

This first and foremost consists in activity choices made on a daily basis, with interventions scheduled insofar as possible according to soil and weather conditions. “During the winter season, we often expect frost, which prevents any compacting. Certain operations are sometimes postponed as plot load-bearing capacity is poor and there is a high risk of creating ruts if heavy machinery is used” statesChristophe Monget, specifying that certain situations require compromise, even if that means partly damaging their soil capital with a machine operated on insufficiently dry land.

Upstream, the technical itinerary and vineyard’s practices will obviously play a major role. For instance, in-depth tilling undoubtedly helps loosen the deepest soils, but the plot will then be much more sensitive to compaction... Frequent passages are the main operation responsible for compaction, and can be reduced by using tools that till several rows at once. Similarly, inter-row grass growth improves soil structure and thus limits the compaction effect caused by machines – whilst boosting water and nutrient circulation.

Above and beyond crop strategies, the main factor that moderates soil deterioration is the equipment used. “The type of machine – tractor or straddler, mono- or double-row – their weight, and their tyre features are determining components” highlights Christophe Monget, who recommends referring to the Compsoil model, developed to calculate “the surface area in contact with the soil and weight distribution, according to tyre width and diameter, and as such the effects on each soil unit”.

Even though, at first glance, it would seem that the lighter the machine the less they create compaction, the type of tyre can actually change everything: “A machine weighing 3 tonnes can cause as much if not more damage than a 5-tonne machine, depending on whether its wheels’ contact with the soil is large or small”.

Using an autonomous weeding robot, such as Naïo’s, helps address part of the problem. Its small weight (1.2 tonnes compared to 3-5 tonnes for standard models) is a real advantage in terms of load-bearing capacity. “With a robot such as Ted, we will of course increase passage frequency, but this will be compensated by a much lighter load, which avoids in-depth compacting. It is without a doubt in deep soils that quick and irreversible destructuring occurs more easily” notes Thibaut Delcroix, Vine Product Manager at Naïo. As such, the weight/power ratio, combined with the proper tyres, will have a completely different effect. Especially as the structure of a weeding machine means it is positioned far away from the vine stock – as opposed to a standard tractor whose wheels drive right by the foot. Tilling is therefore only done on superficial soil layers, and at least 50 cm away from the most critical part of the plant in terms of development.

Moreover, the robot’s autonomous function allows for improved intervention slot management, which can sometimes be quite tight according to the soil’s condition. When faced with a short time slot, farmers will no longer have to choose between two tasks that need completing. “As soon as the soil is dry, the robot can go out into the field without waiting for agricultural workers to be available, as they are often busy completing tasks that needed doing before”, highlights Thibaut Delcroix.

Regardless of the means used, they must in any case be analysed comprehensively: a light weeding machine will only have a small impact if heavy sprayers are used immediately after. “An interesting overall approach could be to weed inter-rows, run a light straddling machine and only till under that row – whilst paying close attention to the tyres used. Yet all of this of course depends on the regions, territories, habits and constraints applicable to farmers”, moderates Thibaut Delcroix.

Naïo teams have kept this impact in mind for projects aiming to develop the Ted robot’s versatility. “The idea is to stick to the idea of a light machine, whose load has been reduced as much as possible to avoid compaction. The tools, engines and equipment scheduled for use with Ted in the future will therefore need to be analysed according to this plan”.