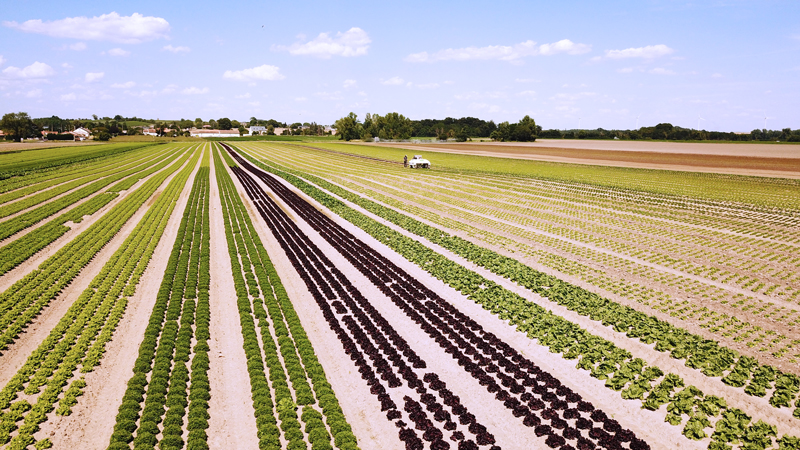 Four years ago, Naïo Technologies set up a partnership with farmers to adapt the autonomous mechanical weeding robot Dino to the challenges of the profession. Created to respond to the current needs of market gardeners, it is valued more than ever by those who have adopted it. From its beginnings, Dino has not stopped confirming its advantages when faced with the tightening of the rules on inputs, management of the seasonal workforce and sector attractiveness.

Nicolas Foucher is at the head of a vegetable co-operative located in the department of Maine-et-Loire. This field crop specialist producing celery, salad crops, leeks and carrots has begun a process to convert some of its plots over to organic farming. He realises that it is more and more difficult to carry out weeding operations consistently. Finding workers in this rural region is sometimes a real headache. The drudgery of these tasks, the low attractiveness of the profession and, as well as these, you can factor in the weather too. “It’s not always easy to maintain the time available for weeding during the busy season.  Machines are monopolised for other work, storms upset the work schedules and weeding flies out of the window” the farmer told us.

To be efficient, mechanical weeding has to be done regularly or there is the risk of seeing some weeds growing and impacting plant quality. Nicolas Foucher began his partnership with Naïo Technologies in 2016. Since this time, the farmer has seen the progress made by the Dino weeding robot: “The robot is now capable of carrying out real quality work with as good a performance as I had before with my guided hoe”, with the advantage of being flexible and light. Dino has shown itself to be even more efficient on small plots. “It’s quicker than the tractor” Nicolas Foucher points out.

“Our goal is to make it as autonomous as possible” points out Cédric from Naïo Technologies, who is co-ordinating operations on Nicolas Foucher’s farm. “The robot is fulfilling its mission this year”, he also says. Being quicker, more flexible and more precise, the GPS RTK guidance is awesome and as close to the plant as possible. “Now, we hope to reduce the use of weedkillers”. The regular passage of the robot weeder ensures clean hoeing. “Dino allows us to schedule hoeing. Two passes were often necessary before. We’re using the same tools: the ploughshare and then the Kress fingerweeders”. The robot is a real weeding tool working in the row.

To date, an operator supervises each pass of the robot. “In terms of workforce, we need one person instead of the two before” the farmer specifies. A real step forward. European norms still enforce the operator’s presence in order to safeguard the robot’s moving around the rows and to avoid any accidents, should an obstacle be encountered. “The aim is to have a completely autonomous robot hoeing the row and we can see that it’s going in the right direction. I’m waiting impatiently for the time when we can carry out the first tests on total autonomy”, Nicolas Foucher enthuses.

Last year, Nicolas Foucher declared again that the development of his farm meant that he had to work even harder, to the detriment of his private life. Today, thanks to Dino, he can schedule the weeding. “The robot has an added convenience: it allows me some free time and at least avoids us having to work at the weekend”. The tractor is available for other jobs, so there’s no need to juggle any more. “We’re a lot more flexible if the weather turns bad and we don’t need to monopolise an extra tractor for weeding”. Job management is simplified and working the soil can be scheduled too, for better quality salad crops. A positive result for all.